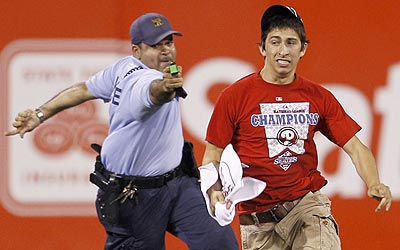 Ruben Navarrette wrote an article recently about the kids in Southern California who decided to wear flag t-shirts on Cinco de Mayo. Much of America wondered if we had gone too far in reversing racism to the point that we cannot even wear clothing with our own flag on it. But Navarette disclosed the other side of the story. The orders from the school were that NO patriotic shirts of any country were allowed to be worn on Cinco de Mayo. When confronted, the 5 boys who went against this order were given the option to either turn their shirts inside out or to just go home. They decided to go home, and the rest is history as they and their parents cried foul against the principal for reverse racism, and the boys were commended for their heroic patriotism.

Navarette goes on to mention the Philadelphia teen who ran out onto the baseball field and gave police quite a chase – until one of them zapped the teen with his stun gun. The nation again cried foul. Navarette asks “What’s more startling — that the officer used a stun gun, or that Consalvi ran onto the field in the first place?”

His final thought has me thinking: “The cultural right wants to cast the story about teenage boys who got in trouble for wearing flag T-shirts as evidence that Americans are losing control of their country. Actually, it’s evidence of something more real and thus more troubling — that many Americans have already lost control of their kids.”

Reading Navarette’s opinion brings to mind news stories in the last couple of years about a local father fighting his son’s speeding ticket by proving the courts wrong through GPS. This same father fought the courts on another of his son’s speeding tickets by claiming it was a speed trap. And more close to home, I’ve heard several parents talk about how they have set their child’s teacher or sports’ coach straight when it appeared their child was being treated unfairly. And yet it’s the same problems they’ve had with teachers or coaches involving their child every single year.  And at the same time, it also brings to mind the parents who have written me and told me about times they legitimally fought for their kids rights, and were being ignored unjustly.

Is Navarette on to something here? Have we, as a nation, “lost control of our kids”?  Do we know best when it comes to our kids?  Or are we hovering too closely to let them learn by suffering the consequences?

4 thoughts on “Have we lost control of our kids?”