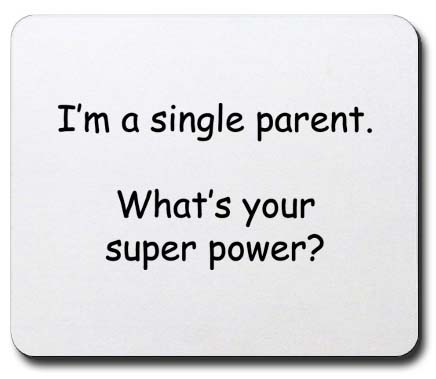 In the beginning of the end, I left my husband. I had known I was leaving for over a year by the time that I actually made the move, but it took a lot of strength and decision making on my part to actually make the jump and leave behind the future we had planned out together. And in the first couple of weeks, I relished in my decision. I was free, and could taste that freedom in everything – the air, the night, my time, and how I raised my kids. I was the epitome of the strong, independent divorced woman, ready to become a spokesperson for any human being that was suffering from a bad marriage.

Of course, reality hit a few weeks in when a case of loneliness hit, bringing along his best friend – Doubt. I doubted that leaving him was the best decision. I doubted I could survive on my own. I doubted my kids would be healthy without two parents in the house. I doubted I would ever meet someone who would love me.

And of course, Doubt also has an evil twin named Bad Choices. Namely, I started dating again way too early. A month after I split, my ex moved on. And rather than be the lonely single one who had no one to love her, I was determined to match my ex and find someone else too. Healthy, right? I tried to live my life as a young, free chick interested in finding that next Mr. Right (or Mr. Wrong…whatever worked) instead of putting the majority of my focus on my kids at home.

It took years for me to conquer the overwhelming feelings of loneliness and doubt, and to overcome making Bad Choices in the name of trying to band-aid the hurt. But I admit to all of you that it’s an everyday struggle. Loneliness and doubt never go away. I still have sleepless nights when I question my little family’s future, and whether I can financially survive till the end of the month. And focusing on my kids when feelings of bitterness well up inside can sometimes be extremely difficult. But the deep-seeded fears have taken root and grown into plants of hope, seeing how far I’ve come from those first few months of being a new single parent.

Along the years, I have learned several survival tips that I wish I had known from the beginning.

First – counseling is vital! I owe my life to the counselor that helped me through those first couple years. She not only helped me to see what was wrong with my broken People Picker, she helped me in strides to become more confident and set realistic goals for myself. She also met with my kids regularly, letting them get out all their feelings of hurt and anger. She helped all of us transform our broken family to become a healthy family that worked together.

Second – budgeting is key. Being on a single income is extremely rough in this day and age. Over the years I have transformed my budget to something extremely solid. I know exactly how much is coming in each month, and how much is going out. I don’t live on credit, and work only with what I actually have. I don’t have luxuries like cable, beauty treatments like hair or nails, expensive clothing, nights out on the town, or anything extra like that. I do allow for a little fun in my budget, but I never go overboard. My kids and our survival is more important than spending money I can’t afford to spend.  And frankly, I’d rather have a roof over my head and food on the table than to get my hair did or wear expensive clothing.

Third – it’s ok to ask for help. Raising a family with one pair of hands is a difficult task. But that’s why we have friends and family. My parents helped me out the first couple of years by letting me live with them. They helped my transition into single parenthood by being my second pair of hands with the kids. And it helped me to go from a stay-at-home mom to a mom who worked outside of the home and supported her family. I also made an alliance with one of my other single mommy friends, trading off weekends with each other’s kids so that we could get a day to ourselves. During that time I was free to get out of the house unencumbered by kids, was able to get my house back in order before they came home again, or just spend a few hours enjoying the silence.

Last – I wish someone had told me to take my time in the dating world. Or rather, I wish I had listened when I was told to wait. Because I started dating a couple months into my divorce, it was a disaster. First off, I was still healing from a bad marriage. And any relationship I started, I brought in that extra baggage. Also, my assumptions were that all guys were the same. So I was on the lookout for any little sign that would prove me right that they were all like my ex. And not only that, I really was choosing guys just like my ex, and each relationship would deepen that original hurt a little bit more until I was ready to swear off dating altogether.

Being a single parent is delicate balancing act. In the world of exes, split parent households, tighter budgeting, single parent dating, and balancing a family with only one pair of hands, it can be a stressful, confusing, hectic life.