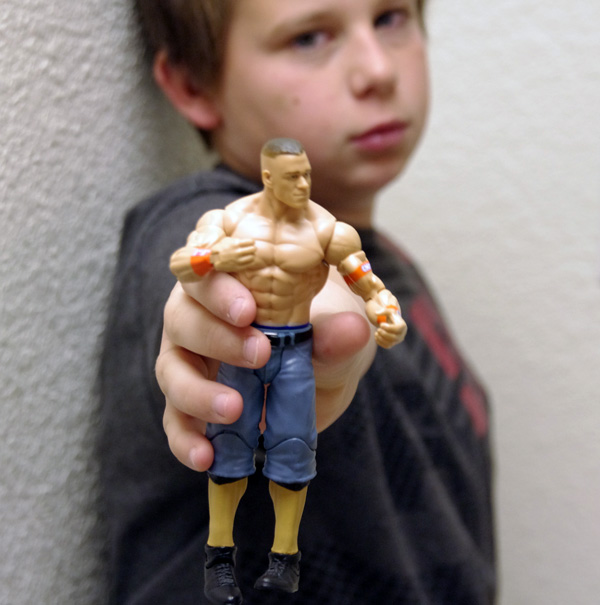 The other night I got together with a few of my girlfriends. I brought the kids with me, and for the most part they stayed in the other room and played with my friend’s 5 year old daughter, Lil K. Lil K is every bit the girly girl, and probably has more dolls than I and my daughter, DQ, have ever had combined. My son, Taz, brought over his new action figure, the newly retired John Cena from WWE (his hero), and I chose that moment to tease the holy heck out of him.

“Hey Lil K, go ask Taz if he wants to play with his doll with you,” I told her. And the Taz glared at me.

Of course, the damage was already done. Lil K chased him around the house with her beautiful Ariel doll with flowing red hair, wanting to see if John Cena would like to play house. And the Taz spent most of the evening hiding in the closet or the bathroom to avoid having his doll, er, I mean, action figure, corrupted by the girly toy.

Apparently, the obsession with action figures doesn’t end with childhood. One of the girls described the argument she and her husband had shared earlier that same day. She had been cleaning his display case of action figures, and decided that the sword in Voltar’s (or whoever’s) hand was too big to fit in the case since it was hitting the glass. So she removed the sword. And by the ranting that her husband put forth after his discovery of the missing weapon, you’d have thought she had actually broken Voltar’s hand clean off.

“If you had told me that marriage included arguments about action figures, I never would have believed you,” she told us as we rolled on the floor laughing.

This morning, the Taz came downstairs and greeted his sister by sticking John Cena in DQ’s face.

“Get your doll out of my face,” she said, pushing his hand aside.

“ACTION figure,” he loudly corrected her. DQ settled the argument by marching herself over to the dictionary on the shelf.

Definition of a doll: a child’s toy in the shape of a person

Definition of an action figure: a small usually plastic doll (hmm…) with movable legs and arms, often based on a character from an action adventure

4 thoughts on “Boys and their dolls”