We’ve finished the dreaded Mission Project, and we survived!  Let me be the one to testify right here and now that anyone who is saddled with this monstrous project can indeed create a Mission, and even have it look somewhat like an actual building.  If uncrafty and artistically untalented me can guide my son in making a stucco-esque building, so can you.

“The way you get involved in your own kid’s school projects is a great metaphor/indicator of your parenting style.”  @cmcauley

Because I love quoting awesome cartoon movie scenes, I have another one for you.  Remember that scene in Surf’s Up, when Zeke is teaching Cody how to make his own board?  And Zeke is totally into the shaping of the board?

“Can I do it now, Mom?” the Taz asked me as I painstakingly applied perfect strokes of brown paint on the ground board, making sure to show him over and over how to move the brush in one direction so that every bit of the board was covered with brown.  But he did just fine as he took over and painted the rest of the board in preparation for the actual building.

I learned that another part of my parenting style was the ability to let this be a learning process in parenting, even though I’m more than a decade into this job as mom.

One really cool tip for those of you who will be making Missions in the future?  White paint and sand mixed together make an awesome stucco.  The Taz sponged this onto the building, and it looked really realistic when it dried.  And a tip for anyone attempting this – pay attention to measurements.  We created a fake Mission mock-up using construction paper that we taped together.  Of course, even creating a model first doesn’t mean your measurements will come out perfect.  You’ll see why in the pictures….

Our Mission Adventure
By Wine Country Mom and the Taz 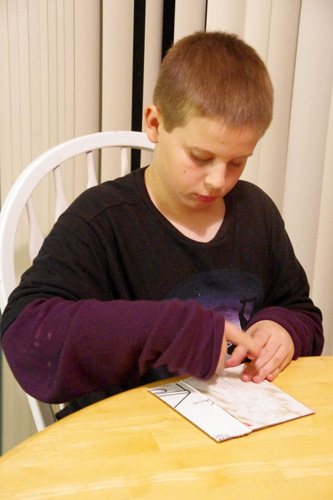 The Taz taping the pieces together so I can glue them on the board. 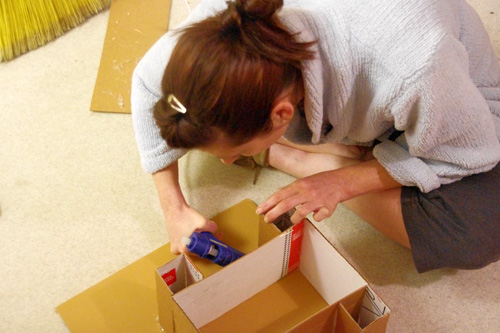 Wearing my Mission Making Uniform, hot gluing the building together.  I do believe this was the worst part of the whole project.  And damn, do I look HOT doing it!

As you can see, I got a little enthusiastic about the glue part. 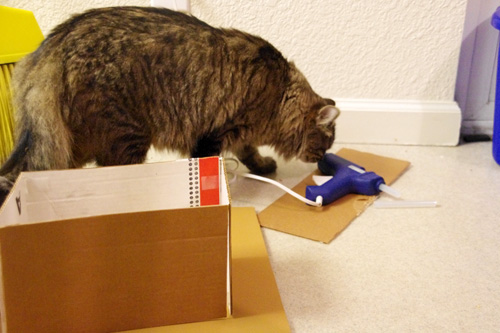 Even Lucci doubted my gluing skills and tried to take over (no curious kitties were burned by hot glue guns in the Mission making process, nor did they come away with paws that stuck together – though they came close).

At this point I was seriously doubting mine and the Taz’s Mission making skills.  It was looking rather rough with glue all over it.  Plus….

…the measurments may have been kind of screwy.  This part was supposed to be taller than the building.  And as you can see by the sides, we had to overcompensate with the glue in portions where the cardboard wouldn’t meet up.  We thought we had screwed up the whole thing.  But after painting it, adding the roof, and then decorating it with embellishments…..

…the Taz came out with a pretty sharp looking Mission.  Those “bushes” are tufts of Rosemary from the bush outside our house.  The bells are tied by embroidery thread.  The rocks were collected from our backyard.  The cross on the top is a chopped up BBQ skewer.  And the roof is made from correlated cardboard painted red.

Other people created their missions out of clay, out of sugar cubes, and one kid even had electricity in his with a flip of the switch!  Have you had to make a Mission with your child?  How’d it go?  And how much of your child’s project did YOU do?