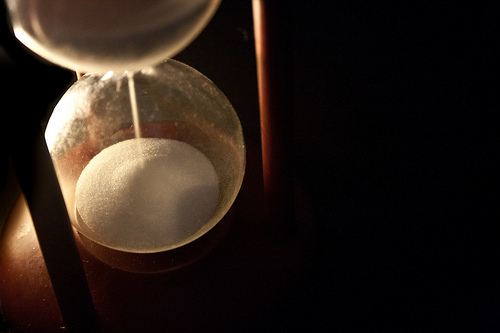 Today I came face to face with the reality that I am wasting my time. A friend was crowing about her good news that she was hired for a freelance piece for a major publication, and they were paying her $2 a word for an 800 word article.

Something about this didn’t sit well with me, and I got really, really angry about it. It took me a full 4 hours before I realized that my feelings towards her weren’t anger, but was merely the green-eyed monster rearing its jealous little head.

But the anger was definitely still there, and it was pointed directly at me.

This last month I have seen in-my-face proof that this life is not forever, and that everything can end at the drop of a hat. I wrote recently about the husband of a Facebook friend who passed away less than a week after his retirement, never getting to enjoy the relaxing fruits of his labors. And this past week, a schoolmate of my daughter’s fell victim to a freak accident that nobody could have seen coming – an event that has been throwing me for a loop over how unfair life can be.

And what the hell am I doing? I am busting my ass for some very short term goals, and doing nothing to take giant leaps towards the future. What if I were to die tomorrow? Am I living my life the way I want to? Not exactly. I mean, sure, I love my job and all I have accomplished thus far. I take nothing away from that. But the thing is, this is not my landing point. I have so many more goals in life, and I am treating this point of my journey like it’s the top of the ladder.

There’s a movie that released today about the end of the world called ‘Seeking a Friend for the End of the World’. The movie got bad reviews, but the underlying message appears to be a good one. In it, the world is given a 3 week time limit when it’s discovered that a meteor headed straight for earth is unstoppable. Many spend their time doing the regular end of world stuff – you know, like having orgies, looting homes and businesses, and going bat-shit crazy. But some are actually more relaxed, taking the next three weeks and living them the way they want to.

Ok, now I’m not going to sit here and dwell on end of the world stuff. If that time ever were to manifest itself in my lifetime, it would be too late to have accomplished my goals of making a name for myself by publishing a best-selling novel. Let’s face it, at the end of the world, who’s going to waste their time reading some silly book? But that’s my point exactly.

NOW is the time to be making my future hopes and dreams a reality – not when it’s too late. I mean, there might be a metaphoric meteor heading my way. My health could fail. I could lose my day job. We could lose our house. My life could end. Or worse, I could lose my children or fiancé. Something awful could happen to steal away any of the passion I hold for writing, and I run the risk of not making myself immortal through the printed word right now while I am still fully capable of doing so.

I’ve spent so much energy banking on a future I hope will come about without actually moving forward to make it happen. I have a rough draft of a book that is sitting in my computer, waiting for after the wedding when I can start working on it – my latest of excuses as to why I’m not doing anything about it now. And I have 567 posts in this blog (568, counting this one) – of which nearly half could be considered good enough to be published in a magazine or in a book of experiences.

Instead, they are sitting here in this blog. Or they were wasted in my former blog where cruel readers used them to rip apart my kids. Or they are gathering dust where no one has read them ever.

My point is, I’ve reached that point where I need to stop wasting time and start thinking about tomorrow rather than focusing on surviving today. I need to get out of limbo and start winning this race against life. I’m worth success. I’m worth putting stuff out there that benefits ME while helping others instead of being just the faceless name behind articles I’m publishing elsewhere that will disappear and be forgotten in another week. It’s time to get off my ass and work to my full potential. Anything less is unacceptable.

And had I syndicated this entry, I would have received $1650 for it.