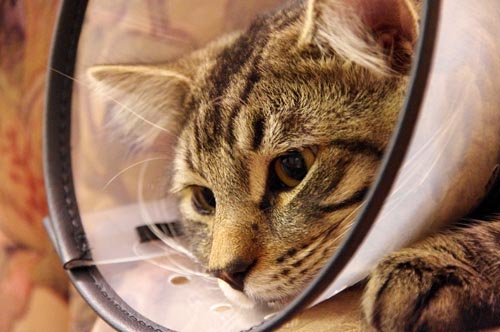 So where we last left off, our family had just survived a war on fleas that took over our house in almost apocalyptic ways like locusts descending on a corn field. We barely made it out alive before something else became apparent.

Our sweet little innocent kitty was becoming a man.

Perhaps it was the way his tiny squeak of a voice was occasionally replaced by what we like to call his “fake man voice”. Usually Lucci gave a sweet little meow, squeaking every 2 minutes just to let us know that he was there, that he might like some food, that he wished we would just sit down so he could take over our laps, or that his litter box was starting to grow live plants and could we please clean it. But every now and then a deep meow would escape from his throat. And he would be left looking all around just like the rest of us as we tried to figure out where exactly the sound was coming from.

Maybe it was the way he swaggered back home, tail up in the air, smoking his imaginary cigarette after a night on the town. Don’t get me wrong, Lucci is an indoors kitty. But every time we opened that door, he was waiting by it, ready to race out at the first chance he got. And if we didn’t catch him right away he would be gone for about 30 minutes before coming home with a smug look on his face. All the hussy cats of the neighborhood would circle our house relentlessly in shameless pursuit, running away as soon as I saw them. And Lucci would stare for hours out the window, looking forlorn because I was putting the kibosh on his philandering ways. But I didn’t want to be the one to answer the door when one of these hussies rang the doorbell, looking for some support for the wee little fluffballs she was carrying by the neck.

But what really cinched the deal was the fact that Lucci did not seem to care for the smell in our new home we had just moved into, and was bent on fixing this little problem all by himself.

Now, before I continue, let me give you a little education on what cat spray smells like. Have you ever entered a Jr. High classroom on the hottest day in May when the windows have been left up, the air conditioning doesn’t work, and the day’s activity has been doing jumping jacks in place for a solid hour? Imagine how it would smell once everyone took off their shoes and then raised their arms. Cat spray smells worse. It’s kind of a mixture between old meat and the worst BO (body odor) imaginable.

This is what Lucci preferred his surroundings to smell like.

His favorite place to leave his scent was in piles of clothing. This was good news, because cat smell is extremely hard to get out of the carpet. But the bad news was that because of our recent move, piles of clothes and blankets were EVERYWHERE. He found a pile of every comforter we owned in my son’s closet, and peed. He settled himself on a pile of freshly laundered clothing left in the laundry basket, and peed. He discovered my daughter’s dirty clothes pile, and peed. And each time I discovered his latest escapade, I would gather up the clothes and wash them immediately. You can imagine how fun this was, especially when the discovery was sometimes made a week or more after the incident. And the smell of dried cat urine does not always leave, even after being washed. We had to leave the doors to our rooms closed at all times, creating a cat free zone where he once had been able to sleep at night.

Note: Not once did we punish Lucci for what is only natural for him. It’s not so much out of kindness and understanding, but more because a cat is seriously not going to have any idea why we are rubbing his nose in a scent that he seems particularly proud of.

It was time for Lucci to go through a little demasculation. I called the vet and made an appointment for the following week to get the deed done, and counted the days until it happened. Of course, Lucci knew something was up, and he reared his cute little teenage head once more. While I was making my bed, he sauntered into my room, looked at me, then squatted on the down comforter on the floor and peed – right in front of me.

Did I mention that my washer was broken at this point? Or that this was the last blanket in the house? Fun times.

The day of the ball chop arrived, and suddenly I felt bad for my kitty. This is not a procedure you want to give too much thought to, for obvious reasons. My trusting little kitty sat in his carrier on the seat next to me as I drove him to the doctor who would be depriving him of his manhood. He looked at me with those big golden eyes as the vet picked him up and carried him away. I apologized to him, hoping that he would speak to me again once it became clear why he was in this strange place that smelled of other animals.  And when I came to pick him up again, the poor drugged-up cat could barely put two meows together. To make matters worse, he had to be fitted with a “cone of shame” to prevent him from licking his wounds too much. The cat could not walk in a straight line. He was confused by the sudden round thing around his neck that kept hitting the walls. I felt awful for him.

And of course I got video of the whole thing.

By the way, please excuse the house.  For some reasons it gets messier on days that end with a Y.  Weird….

Rest assured, Lucci is fine now. It’s been two days since the procedure, and he can make it onto the couch by himself now. He’s sober again, and last night he even played with his favorite toy mouse a little. He still hasn’t ventured up the stairs since becoming less of a man. But more importantly, he hasn’t peed outside of his litter box, either.

And no baby mamas have been pounding down our door either.

WC Mom’s tip of the century for getting stains and odors out of laundry:
When I say I tried everything to rid all of our clothes and blankets of cat urine odor, I mean I tried everything. We tried several different types of laundry detergents and softeners. We tried stain remover. We even tried using Apple Cider Vinegar, an agent that one website swore by. NOTHING worked. But then I rediscovered Borax, an all-purpose laundry booster and cleaning agent. Not only did Borax do the trick to eliminate the smell and staining from cat pee, it worked on a down comforter that had been peed on weeks prior to my discovery. I have not been contacted by Borax to make this claim, I am only passing on this information to anyone else who might be dealing with an extremely smelly situation – whether it be cat pee, baby spit-up, or tween underarm stench.

7 thoughts on “Owning a cat… who's not neutered”