This last week, DQ was an only child. In a household that generally consists of three kids, she was gleeful in telling Mr. W and me that we were finally a “normal” family – one that was made up of just two parents and one adorably sarcastic 13 year old. Mr. W’s son was in Tahoe with his mother. And Taz was at the Ex’s house several hours away. DQ had decided to skip the visit with her dad this time around, and was anticipating a week of peace and quiet from her annoying little brother.

I was looking forward to it as well. Being cooped up in the same house all summer long, DQ and Taz were only inches from literally breaking each other’s necks. They were constantly bickering and purposefully teasing each other to add some excitement to their boredom. And in the end, I was the one that ended up getting annoyed long before either of them did, resulting in a permanent vein taking residence on my temple and a strain in my vocal chords. But they took great pleasure in teasing the holy heck out of each other. Let me tell you, having only one kid who had no one to fight with sounded like a heavenly vacation. I didn’t even mind that our kid-free week was no longer kid-free. With just my fairly well-behaved teen, it would still feel kid-free.

Except that DQ had no one to torment – EXCEPT US.

When the weekend ended, Mr. W and I had to go back to work. DQ was left to sleep in all morning long until she woke up to her quiet house. By the time we came home, she wouldn’t leave our side. Usually she would stay cooped up in her room or plugged into something (iPod, TV, computer – usually all at the same time) on the couch. But this time, it was like she couldn’t get enough of us. At first it was cute. Obviously she had been lonely in the house on her own. But soon, it became apparent what was going on.

She was trying to torture us!

We went to our room to change from our work clothes. Upon re-opening our bedroom door, there she was on the floor, her feet leaning against our door. She followed us down the stairs and ribbed us mercilessly. If we said anything, she turned it into some funny quip at our expense. Settling down for the evening to watch TV, she sat on the couch with us. “I’m not touching you,” she said as she poked her finger at my leg. And the sarcasm! While I generally think of DQ as the funniest person in the world, it was exhausting keeping up with her and her jabs at us. Neither Mr. W nor I were safe as she mercilessly ribbed us.

Towards the end of the week, the teasing and ribbing had ebbed a bit. It was still strange not to have the boys in the house. But the benefit was that the house stayed clean and calm. And DQ and I had enjoyed some much-needed girl time together. But the day finally came when I needed to pick Taz back up.

“Do you miss your brother?” I asked DQ, and she shook her head vehemently.

“No way!” she said. He ironically called a few minutes later and I chatted with him over the phone.

“Yeah right,” Taz said. “Fine, let me talk to her,” he said after I insisted it was true. I handed the phone to DQ who rolled her eyes as she took it from me.

“Hello,” she said in a bored voice. And before long, the two of them were catching up on everything that had happened throughout the week while they were away from each other. In fact, they talked for a full 30 minutes before hanging up the phone. And waking up the next day, the two spent the day playing together at the pool and planning some time to play with friends together the rest of the week.

Taz has been back for several days already, and they have been getting along famously ever since. I’m not sure how long it will last, but it’s sweet to see. Before this week, I would have sworn they hated each other. I always told them that one day they’ll be friends when they’re older. But even I had my doubts as they denied that would happen. However, seeing them get along the past few days, it made me aware of the deep bond the two of them share with each other. Their perspective on the events of our life are separate from mine. The divorce, sharing a home with their grandparents, moving into our own place, moving in with Mr. W, issues with their dad, growing up…

When I’m gone, they’ll still have each other. And they’ll be that common link to a family that once went through hell and back to get to the peaceful place we’re at now, and wherever that road leads in the future.

And they’ll be friends. I’m sure of it. 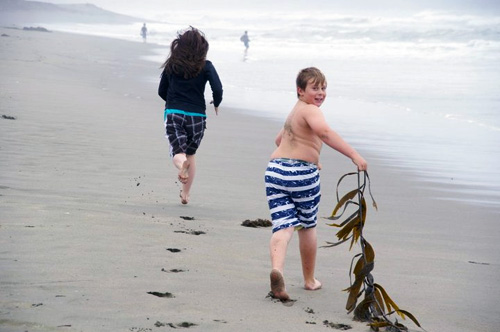