I’ve kept you waiting long enough. Last week I gave you an announcement.  This week?  I offer you the story behind it….

We’d made it. Here we were, at our favorite little camping spot in the world – sans kids! I don’t know any parent that doesn’t need a break from their darling children once in a while. All I know is the day or so before a planned kids-free escape is much longer of a wait than the anticipation before Christmas or a birthday. But as Mr. W and I made the drive up the hill, I slowly let out a little bit of air and then inhaled the quiet of losing my parent-status for a whole 24 hours.

We unfurled the tent and put it together, this time old pros as we shaped our home for the night. We unpacked the car quickly before grabbing our essentials to take a hike. Mr. W placed everything in his pack, graciously allowing me to walk without having to carry anything. And we jabbered on and on as we walked. Well, to be fair, I jabbered on and on.

“Not to get ahead of ourselves,” I started out, “but wouldn’t this be a great place for a honeymoon?” I asked him.

The question wasn’t totally out of left field. Mr. W and I have been talking marriage for awhile, and the only thing holding it up was the ring.

“You need to go pick one out!” he had told me, insisting he wanted me to wear a ring I loved. But I wasn’t sure how I felt about that. Did other women pick out their own engagement ring before the question was popped? And honestly, did it really matter that much? I’d once thought I needed a certain type of ring on my finger. But as time went on, it mattered less and less. I knew he was the one I wanted to spend the rest of my life with. Whatever the band was, it would be special because of the meaning behind it.

But a few weeks later, the two of us stood giddily in the jewelry store, the perfect ring resting on my finger. It needed to be ordered in my size, and he shooed me out as the rest of the details were taken care of. All that was left now was the proper proposal.

What better than a kids-free weekend?

“I don’t want you to get your hopes up,” Mr. W told me days before we were to leave without the kids. “I’m not proposing this weekend.”

I thought it was a joke and grinned. Then I saw the seriousness in his face. I tried to hide the disappointment, but it had fallen in puddles around our feet.

“The ring hasn’t come back yet from being resized.”

“You could, you know, propose without a ring,” I told him, but neither of us wanted that.

“We’ll find another time to do it, and it will be special,” he told me. “But I don’t want it to ruin our weekend away.”

“It won’t,” I promised, putting my brave face on. “We need this getaway. Truth is, I’m happy to just get some alone time with you.”

And I spent the rest of the week focusing all my energy on not being disappointed. Sure, it only made sense to have it happen in this place. Whenever we needed to escape reality and clear our heads, this was our refuge. But I couldn’t let it take away from the fact that we would be enjoying its serenity regardless.

Walking up the path, we came towards a clearing that overlooked the whole grounds. Two girls sat there, listening to the sounds of music below from fellow campers. Mr. W paused briefly, but then continued walking. All of a sudden he grabbed my arm.

“Wait,” he said, pulling me back. I thought it had to do with the view, even though the girls were sitting where the view was. Or maybe it was to hear the music. But when I looked at him, he was on his knee pulling a silver box from the pocket of the backpack. My hands immediately flew to my mouth, tears springing to my eyes as I realized what was about to happen. The girls in the clearing turned away from the music and were now focused on us, but I didn’t even see them. All I saw was Mr. W holding a ring in his hands.

“We’ve been talking about this for awhile,” he said. “I want to spend the rest of my life with you.” I could barely breathe. “Will you be my wife?”

In moments like these, when you’re so sure the man on bended knee before you is the one you want to be with forever, there’s only one thing to say.

“Here? Now????” I exclaimed, my hands shaking. In my surprise, my first answer to his question wasn’t YES, but shock. He had to actually ask me later if I had even said YES, to which I assured him that was most emphatically my answer. 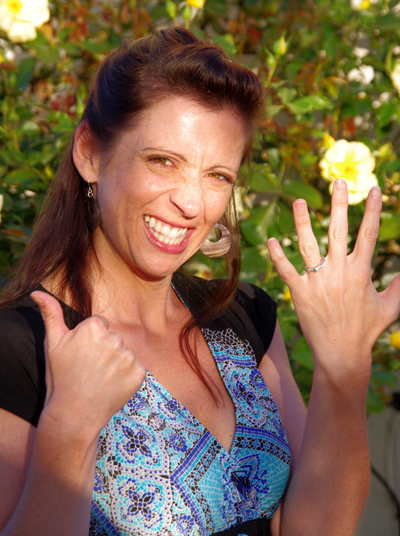 8 thoughts on “How the Question was asked”