This is the longer version of an article that will run on Friday, June 15th in the Press Democrat, and another version of the personal experience I wrote about in the blog article titled Up, Up, and Away.

Back in 1783, the very first passengers to fly in a hot air balloon were rather speechless about the experience. Of course, this was likely due to the fact that these inaugural airborne travelers weren’t human, but were in fact a duck, a sheep, and a rooster whose flight under a linen and paper balloon traveled two miles within 8 minutes, flying to an altitude of 1500 feet. However, in an age when traveling by air was something that only happened in dreams or stories, the adventure would have left most anyone tongue-tied.

While utilizing heat to make things fly has been traced back centuries in history, this primitive form of air travel for humans is attributed to brothers Joseph and Étienne Montgolfier. The idea was manifested years earlier as Joseph watched billowing laundry rise from the heat of the fire it was drying over, and was later mused upon as a military vessel during a tumultuous time of war. After many experiments of capturing heated air within different types of material and testing the theory with symbolically chosen animals, Étienne flew as the first human passenger in a tethered flight, paving the way to a new method of travel.

Once airplanes made an impact in the way of air travel, however, the novelty of hot air balloons began to wear thin. It wasn’t until the last 50 years when advancements reintroduced hot air balloons as a form of sailing through the air, making it one of the safest modes of aviation.

Today, hot air balloons serve as a large part of tourist attractions in areas where the scenery is exceptionally opulent. Sonoma County is one of those regions, cloaked with rows of leafy vineyards, acres of farmland, and a valley embraced by rolling hills and fair weather. As the temperatures escape the icy cold of winter in favor of cool spring mornings, it isn’t uncommon to see the dawn sky peppered with these colorful balloons.

Those wishing to ride up in a hot air balloon should be willing to get up before the sun, the time of day when the wind is at its most calm. Because balloon flights depend on weather conditions, there is always a chance that the flight will be cancelled and need to be rescheduled. Many balloon companies will call their passengers the night before to confirm the flight depending on the expected temperament of the weather, as well as to offer suggestions on how warm to dress.

Up & Away of Windsor holds their meeting place for those venturing a ride at the Sonoma County Airport in north Santa Rosa. The company has four balloons, one of which holds 10-12 people and one that is wheelchair accessible with room for two more passengers. The latter basket is the first of its kind in the United States, complete with a drop-side that doubles as a ramp meant to easily maneuver a wheelchair aboard. The side of the basket holds a see-through panel to reveal a clear view while up in the air. 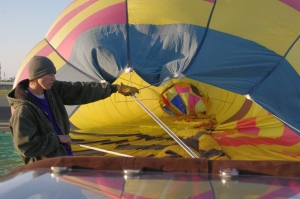 As vibrant as the flight is itself, the pre-flight preparations are just as dazzling of a vision. The balloon crew brings the baskets out onto the ground, laying out the deflated balloon envelopes across tarps. An inflator fan is placed at the neck of the balloon, blowing in air to help it billow out properly. When it’s halfway filled, the burner is fired up and starts heating the air inside the balloon. This is when it’s apparent how large these balloons are, seeing the massive giants in comparison to their small surroundings, all as the sunrise casts orange rays against the colorful cloth.

Once filled completely, passengers make their way into the basket. At this point the balloon is firmly secured to ensure it won’t start floating away before everyone has found his or her place. But once ready, the lines are untied and the pilot fires up the burner.

The liftoff happens gradually, floating slowly against the ground before gaining momentum. Because the basket is rising into the air with its passengers, there is very little sense of altitude. However, those more sensitive to heights might feel a bit of flip-flopping in their stomach for the first several minutes of flight. Even Up & Away Ballooning’s owner and pilot Mike Kijak admitted to having a fear of heights despite his occupation. His open confession merely attested to the lessened sensation of elevation while rising 3,000 feet into the air.

Once drifting in the air, the view showcases a much wider horizon than anyone would be able to see from the ground. On a clear day in Santa Rosa, the view can extend from Napa to Bodega and Windsor to nearly Petaluma. The balloon travels with the air current, making the wind virtually unnoticeable. Below, fields of green vineyards stretch in perfect rows with large jackrabbits hopping quickly between the columns to escape the large vessel that looms overhead. On this recent journey, one balloon dipped down towards the vineyards, almost touching the leafy vines before floating back up. Another performed a “touch and go” above a large pond, the bottom of the basket skimming the water briefly before it rose again into the air. All four balloons made their way down the valley in a slow-moving race to the finish line.

It’s audibly quieter that high off the ground. Barking dogs, gobbling turkeys, and crooning peacocks echo from the ground in between blasts of hot air from the burner. As he flies, Pilot Kijak fills pockets of silence with stories that range from the history of ballooning to experiences he’s had in the past 20 years of being a balloon pilot. But often, he remains quiet to allow guests the opportunity to view the world unencumbered by interruptions. For many passengers, this will be their first view of Sonoma County, utilizing the experience as just a part of their vacation before traveling many miles back to where they live. In that, they see our county in a way many lifelong locals have never experienced.

An abandoned airstrip in southwest Santa Rosa is the end of the journey. On this trip, Pilot Kijak lowered the balloon expertly, but got caught in what’s called a “box wind”, a current of air that travels in the opposite direction of the air above. As a result, the balloon traveled backwards and away from the airstrip. To compensate, he brought the balloon back up and overshot the strip before lowering the balloon once again. This time the balloon caught hold of the box wind and traveled back to the airstrip where the chase crew was waiting. The landing was wonderfully uneventful, without even the hint of a bump as the crew grabbed hold of the basket and lowered it gently to the ground. They relieved the balloon of all its air before rolling it up and packing the balloon away.

Many of the local balloon companies in Sonoma County finish the adventure with a special brunch before sending their guests on their way. Up & Away serves a delicious homemade brunch made by Mike Kijak’s wife, Patty, of quiche, coffeecake, chocolate covered strawberries, and more, offered alongside mango mimosas on the beautiful grounds of Kendall Jackson Vineyards. The workers shed their tough exteriors to join in on the fun with guests and their coworkers. Many of the staff began working with Up & Away because a family member invited them.

“I just came to see the balloons,” Gaby Vargas, a balloon chaser and pilot told me as he shared the story of his cousin inviting him along for a ride. Ten years later, he is still showing up every day “just to see the balloons”, as well as to fly or chase them.

The adventure ends when the crew lifts their glasses and Pilot Kijak offers a traditional Irish blessing to all the passengers who rode in one of the four balloons that day.

“The winds have welcomed us with softness. The sun has blessed us with its warm hands. We have flown so high and so well that God has set us gently back into the loving arms of mother earth.”

A huge thank you to Up & Away Ballooning in Windsor for giving me this opportunity.

One thought on “Rising in a hot air balloon”