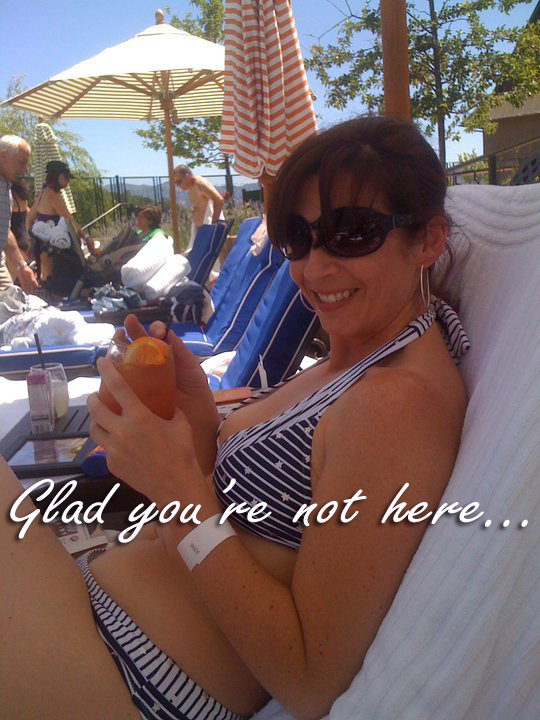 This article publishes in the Press Democrat on August 10th.

The kids are visiting their dad this week. As a result, the house is strangely quiet. The TV, which is usually blaring with bright pictures and loud voices from attention seeking sitcoms, has been off for days. And the Internet speed is curiously faster without video games tying up the bandwidth. The living room is free of clutter, and the food in the kitchen is intact for much longer than usual. In fact, our food bill this week was much lower than usual, and it’s been really nice to cook for two rather than five. Our calendar is looking pretty bare this week, and the cash in my wallet is staying put instead of being handed over to kids who need new clothing, a soda from the store, money for half-done chores, or whatever their fancy of the moment happens to be.

I was asked recently if I missed my kids. Without hesitating, I said absolutely not. It was only after I said it that I realized maybe I shouldn’t have been so enthusiastically quick in my response. I love my kids. I love that I have them with me the majority of the time. But after a long summer of bored teenagers taking over the house, I love that they are at their other parent’s house for 7 glorious days.

It’s been a really long summer. My son, Taz, has taken to video game marathons while I’m away at work. Despite the sunshine outside, his comfort level takes place in his darkened bedroom, chatting away with friends on his headset. When he’s not doing that, his butt is planted on the couch watching TV. Dirty dishes are piling up in his room even though he’s been told food doesn’t belong anywhere but in the kitchen. When I come home from work, he’s usually back upstairs in his room, talking loudly into his headset while his friends shout back through the television. Meanwhile, the downstairs TV is still on with whatever kids show he was watching earlier, the living room totally destroyed and the kitchen showing blatant signs of whatever he ate that day through the food on the counter and the garbage on the floor.

But the noise from my son is overruled by the pounding beat coming from upstairs. Frizz, my stepson, has taken to listening to club music at extremely loud levels at all hours of the day. From the moment he wakes up at 2 pm till late in the evening, all that can be heard throughout the house is bump, bump, bump, bump. I’d like to strangle whoever thought it was an excellent idea to buy a teenager a sub woofer for his tiny room. While we are at work, Taz and Frizz compete with each other as they try to hear their own sounds above the others. The other day, Taz’s TV was on full blast, as was Frizz’s pounding music. This was what I got to come home to. The kicker was that Frizz was also wearing earplugs to drown out the noise. Tired of sounding like an ancient broken record about keeping the noise at a level that is respectful towards everyone living there (just writing that out makes me realize what an old fogey I’ve become), I fought the noise in the most mature way I could muster. I figured out just how loudly the downstairs surround sound could play my personal mix of Coldplay music. Apparently pretty loud – at least loud enough to drown out all the other music.

In the midst of all this is my daughter DQ, who is suddenly very much in puppy love with a boy who lives near us, and wants to spend every waking moment with him. Take a hormonal 14-year old girl, add in a 14-year old hormonal boy, factor in the summer break right before entering high school when both have a lot of free time on their hands, and mix it all together. The sum of this equation supersedes any stress that videogame marathons and subwoofer competitions can induce by about a million.

So when it came time to drive my kids several hours away to stay with their father for 7 whole days, I couldn’t throw their stuff in my car fast enough.

In the time they have been gone, I have enjoyed a few lazy days by the pool with a magazine in my lap and a cold drink within arm’s reach. I have gone to bed early every night, and woken up refreshingly early every morning. Mr. W and I have even enjoyed a couple nights out on the town.

In a few days, my kid-free staycation will be over. By then, I will be ready to take back the reins. But until then, I think I will enjoy this brief interlude from motherhood while it lasts.

One thought on “My Week Without Kids”