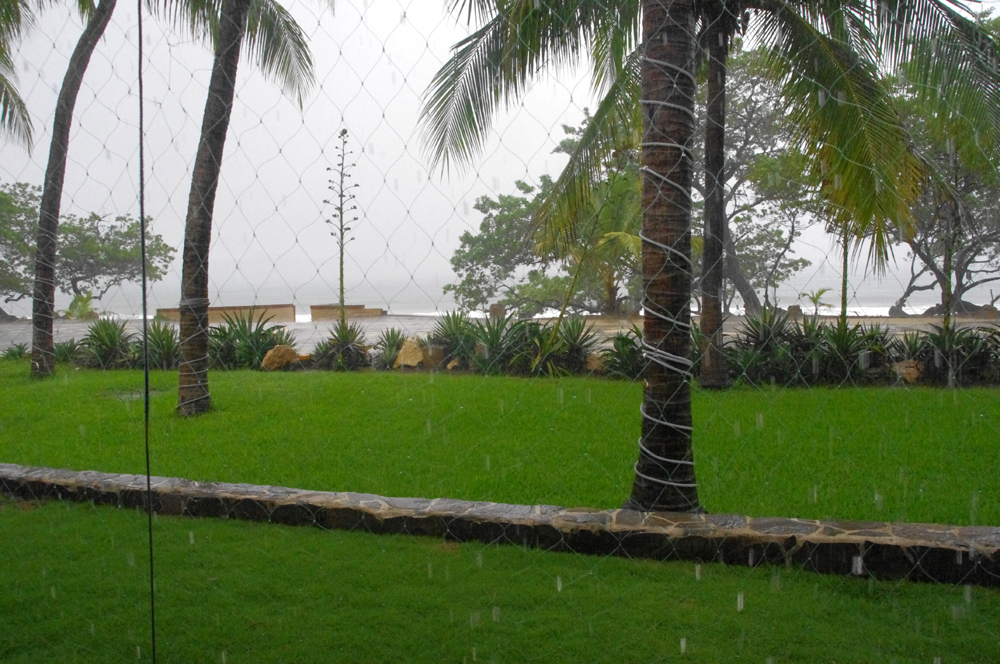 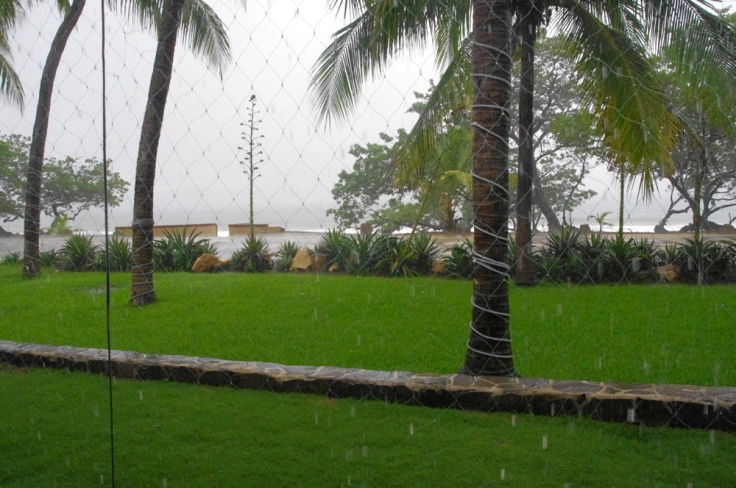 It was raining in the morning. It wasn’t just a little rain, it was as if the sky opened up to dump the monthly allotment of rain in one sitting. According to the concierge, this may have been true. The rainy months are generally September and October, yet the first rain of the season was yesterday.

It was lame, really, that this bummed me out. But one look at the rain and I was suddenly cast into a state of restlessness, boredom, and a bit of homesickness all in one. We’d booked a kayak and snorkel tour for the morning that had to be cancelled because of the weather. It was the only thing we had planned for the day, and left us wondering what else to do. We ended up going on a search for souvenirs. Shawn found some Costa Rican t-shirts, I found nothing. We went back to the hotel and decided to try a drive up the coast. However, a fallen tree blocked the road towards the southern coasts. So we set out towards Liberia. Again, we were blocked by bad roads and severe flooding. It seemed as if God was telling us it was best if we stayed put.

But I was restless, bored, and homesick.

Here’s a video of what we saw all day long:

Ok, admittedly it’s kind of pretty.  And a rain storm here totally beats the pants off of a northern California cold and dreary rain storm.  But still, I was restless.

Shawn was a saint. I know he was sensing my unrest, and yet he remained calm and patient with me. “What would you like to do?” he’d ask me. “I don’t know,” I’d say each time. We were nearly accosted by an overly eager hotel guest who had apparently discovered that Costa Rica has caffeine. Shawn and I spent the next 30 minutes trying to escape him, an amusing game on such a rainy day. Eventually we discovered the exercise room, and I realized that more than anything I just needed to do something besides relax, eat, and sleep.

It won’t surprise me if I end up with 10 extra pounds after this honeymoon, though it’s starting to bum me out. The all inclusive plan we have at the hotel allows us to eat and drink as much as we want. After months and months of starving myself and exercising to be in the perfect wedding shape (and it really paid off on my wedding day!), the past week has become a free for all, calorie-wise. My favorite are the alcoholic beverages I’ve enjoyed on a daily basis. Today I had a Pina Colada. Yesterday and the day before were delicious mojitos. The first day was a Mai Tai. On each plane ride was a gin and tonic, as well as sips from the congratulatory champagne. At home, I never drink. There are too many calories, I don’t want alcohol in the home due to mischievous teenagers (namely my teenage daughter, DQ), and I’m such a lightweight that the cost just isn’t worth it. But for “free” and while we’re on vacation? Pour me something fruity, bartender.

However, my waistline is expanding. I flipped through photos of our stay in Tabacon, and was horrified at what I saw. Instead of luscious greenery and gorgeous waterfalls, I saw a round belly and thick thighs. I can’t help but check my profile repeatedly in the mirror, blown away every time by how small my bathing suit bottoms seem to have gotten in such a short amount of time…

At any rate, the exercise room was there, and it was calling my name. My dear sweet husband told me he’d love to join me in getting a bit of fitness in. So we quickly changed and headed to the room. It felt amazing to run again, working up a solid sweat as it pissed outside. Shawn took turns among the weights and the elliptical. I mostly stayed on the treadmill, adding in a lite elliptical, ab exercises and stretches at the end. By the time we were done, the room felt muggy and hot, we were dripping with sweat, and we felt amazing. It was just the thing to turn the day around.

The rain suddenly felt inviting as a way to cool down, so we each grabbed our books and headed to an umbrella’d table to read while sipping a Pina Colada (me) and coffee (him). He napped while I got immersed in the story (The Lovely Bones, for perhaps the 4th time ever).

The concierge came and visited us during this time to refund our money for the scuba diving trip. She was 29 years old , but looked as young as a 16 year old. While Shawn went to get change for the money she had, she and I discussed where I was from, and vacations in general. She admitted she always wanted to visit California, and said that if she ever did she’d visit the redwood forest. It was funny to hear her say this, as redwoods are something I definitely take for granted. Shawn has told me that in his short time living away from Sonoma County, he missed the redwood trees the most. I never thought about whether I’d miss them or not, and I find it hard to believe that I would. But her enthusiasm over these kind of trees reminded me of my own enthusiasm over seeing the rain forest and the wildlife it holds.

After another filling meal (urp) we soaked up the sun that had finally appeared. We’d booked misajes (massages) earlier, and only had 40 minutes till it was time. It was just enough minutes for me to grab a cat nap. I set my alarm and immediately passed out. What felt like 2 minutes later, the alarm was sounding and we were off again. Two pretty ticas (Costa Rican native gals) waited for us at the spa. We’d scheduled deep tissue misajes, and these two looked so tiny and young. But man, could my masseuse hurt me good. She rolled my hamstring flat until I finally had to ask her to back off. From there, she kneaded every muscle in my body with precision. Shawn and I opted to be in the same room, and it made me curious if they were performing the same routine.

Now I’m sitting by the pool, rehashing the day to the sounds of Spanish Caribbean music. Shawn attempted a dip in the ocean, but the storm kicked up so much gunk it was like swimming in chunky stew. He came back looking something like a drowned rat, coconut husks and sediment all over his body and trespassing in his shorts. The air is a little cooler, probably the coolest it’s ever been during our stay. Hopefully it will be a bit warmer tomorrow when we may go zip lining (not my favorite idea, but my husband is truly enthusiastic about this idea, so much that he was willing to forgo massages in favor of it).

All in all, I think today was meant to be a down and relaxing kind of day. It worked out for the best.

P.S. Several times today, Shawn and I have been able to refer to each other as husband and wife. I love the excited feeling it places in my belly each time. I hope I never get tired of hearing him call me wife, or me calling him husband. 🙂

Alas, no pictures were taken on this day.  But never fear, there will be more tonight when I post Day 5!